We are ludicrously pleased with our pom-pom tree:

and in anticipation of the Pom-Pom Christmas tree trend that is going to sweep the globe next year ( 😉 ), here is a little how-to… First and foremost, START MAKING POM-POMS EARLY!!!
We were pretty organised (for us) and started making ours at the beginning of November. Depending on how big a tree you want, you could always start really early, and just make one a night for the whole year!
The hardest part was finding the wool, as I had decided I didn’t want to buy any new wool for it. Originally we were hoping for all the pom-poms to be the same shade of green, and at one point in the middle, we were thinking we might have to go totally multi-coloured, due to a distinct lack of green wool.
We ended up with all shades of green, and also some blue (you can get Blue firs can’t you?!), and I’m actually really pleased with how it looks. I think all the same colour would have ended up looking a bit much. I would love to try and make a multi-coloured tree at some point though.
If your experience of pom-pom making extends only to tedious hours spent with cardboard doughnuts, and you wither at the very thought of making more than one pom-pom, then never fear. We used a set of pom-pom makers 🙂

I wouldn’t actually recommend the ones like these though, as the big one has now broken 😦
At the Handmade Fair Pom-pom making workshop, we used some different ones that seemed a bit more robust. Although they are more expensive, if I get some more, I’ll try these ones instead: 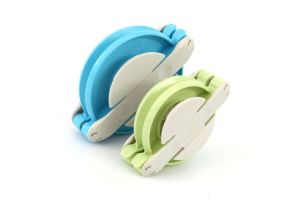 Make a variety of sizes-you will need big ones for the bottom, and then getting smaller as you move up the tree. When you tie them round the middle, leave the ends long, so that you have plenty of yarn to tie your pom-poms to your frame.

I was very kindly donated most of the wool that we used: either from friends, our local Buy Nothing Group, or from the Make Do and Mend-able Pre-Loved Craft Stuff Facebook group. I picked up the odd ball from charity shops, but it’s amazing how hard it is to find any secondhand wool at all in the charity shops, let alone in a specific colour! Again, if we had been planning further ahead, I could have been scouting for wool all year 🙂
It’s also worth looking on E-bay, os posting a WANTED in your local Freegle or Streetbank group.
I am a great believer in ‘just ask’. Posting on your own personal Facebook page or twitter account, with a little bit about what you are hoping to make, may result in more donations than you expect!

Whilst you are pom-ing, you need to thinking about how big you want your tree to be, and a frame to attach the pom-poms to.
hubby made this one for ours, from some peg board off-cuts, and some chicken wire we had kicking around in the garage:

I won’t go into detail on the frame, as I was lucky enough to just be presented with it by hubby, but it looks pretty simple (apologies hubby, I’m sure it involved vast amounts of complicated calculations 🙂 ) Cut two identical triangles; cut one in half down the middle (to give you 2 rich angled triangles), and then nail the 3 pieces together on blocks (you see, I said it was easy….!)
The chicken wire is then artistically draped around to make something that vaguely resembles the shape of a Christmas Tree.

Then you just need to start attaching your pom-poms!

We thought we had enough….

I originally wanted to tie them on with knots that could be un-tied, as I had plans to use the pom-poms for a rug after Christmas, but we ended up tying them on in knots because: a) it was easier and b) once we realised how cool it looked, we didn’t want to dismantle it!
As I said earlier, start with big pom-poms at the bottom, and work your way up, using smaller and smaller pom-poms as you move up.
It is probably easier to make all your pom-poms first, and then attach them all, so that you get the colours distributed where you want them. We had a gap left at the top, and had to make more, but only had about 2 colours of wool left, so it left a patch of very similarly coloured ones!

For the fairy lights:

I used my multi-pom to make multiple poms (you see what I did there!) in one go. And had to ask for yellow wool donations. 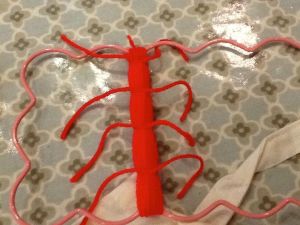 Pretend this wool is yellow…

I had planned to make loads, and then thread them onto yellow yarn, to make a kind of tinsel effect, but in the end I didn’t have enough wool, so settled for the ‘subtle’ fairy lights instead! I threaded a darning needle with some green wool and then threaded the pom-poms on by poking the needle right through the middle of them (with these ones, you want to cut the ends of the middle tie bit the same length as the rest of the strands of the pom-pom-ie nothing hanging down!). Then I distributed them roughly evenly, and wound it round the tree. I poked the green yarn thread in between the big pom-poms of the tree, so you can’t really see it, and it looks like the lights are there by magic…

For the red ‘tinsel’, I used two strands of red DK yarn, and a 5.5mm crochet hook, and just crocheted a very long starting chain. Again, I then just wound this round.

And to top it all off, I managed to crochet a snowflake/star!

In my clear-out for the #MinsGame, I un-earthed some crochet magazines, and one from this time last year had a free snowflake kit on the front, complete with sparkly yarn and instructions 🙂 If you don’t have the same kit (!), then check out this pattern here from the fabulous Lucy at Attic 24.

So there you go, now you too can have your very own Pom-Pom Christmas Tree! Go on, you know you want to…..

6 thoughts on “How to Make a Pom-Pom Christmas Tree”