So as we prepare to say “So long” to 2013, here is the obligatory Make Do and Mend Review. This may well bore some of you to tears, and I apologise if that is the case. But I know there are some new followers out there, who may not have been reading all year, and well, it’s that time of year…!

The year got off to a bang when we joined in with Wiltshire Wildlife Trust, and the Rubbish Diet. We succesfully slimmed our Bin (a combination of getting a Green Johanna for our food waste, learning that we could recycle our stretchy plastic, and being a luittle more thoguhtful about the things we were buying), but chickened out of even attempting a Zero Waste Week.
In the spirit of Slimming our Bin, we went cold turkey on baby wipes, and I experimented with homemade deodorant (both of these innovations are still in force!)

In February we ‘planned to fail’ when we deliberately broke our own rules, and bought new *shocked gasp*. BUT we decided that solar panels were a good investment and a definite help in a quest for a more sustainable lifestyle, so we magnanimously let ourselves off.
And in case you missed it, February saw one of the most popular posts of the blog-Homemade Hobnobs 🙂

I fulfilled several of my 2013 New Year’s Resolutions, by running some Upcycling workshops with Emma Croft from Wiltshire Wildlife Trust, helping to start up Warminster’s own Repair Cafe, and co-hosting 2 successful swishes! And alongside a lovely local seamstress called Verity, I set up and ran two great days sewing pillowcase dresses for the “Dress a Girl Around the World” project-we need to do a count up, but I think we are probably well over 100 dresses now, and need to set another date for the New Year.

My Make Do and Mend Year, have had some great press this year, with features in the local press, regular appearances on BBC Radio Wiltshire, a double page spread in the Sun, a teeny piece in The Times, a bigger piece in The Sunday Telegraph, as well as Best and Take a Break! 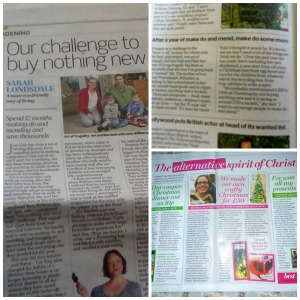 2013 was a blast, and My Make Do and Mend Year led to lots of opportunities that I never would have had, or indeed envisaged, at the beginning of the project: giving a TED talk, making it to the finals of BritMums Brilliance in Blogging Awards, speaking to the WI, being on a guest panel at a Trashed screening at the National Marine Aquarium!, and even speaking to students at the London College of Communication about blogging. I got to meet some bona fide film stars when the inspirational Jen and Grant came to lil old Warminster for a screening of their awesome file, The Clean Bin Project. And thanks to Ecover, I attended my first ever blogger’s press launch for their Message in a Bottle campaign, and got to tread the Green Carpet at the Observer Ethical Awards.

I made what at times felt like endless presents, and patched jeans, and hubby did his bit too, fixing and mending, and gluing. 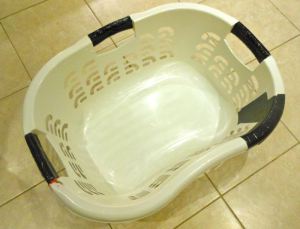 I made a public declaration to make the blog into a book. I have to admit that this project has stalled somewhat -I wrote a huge proposal, and two sample chapters, and sent them off to several publishers, who all came back with very lovely, very polite, NO’s, and inevitably this is a little disheartening. But I am not one to remain down-hearted for long, so I am going to try and self-publish, when I can carve out the time to do some more writing!

It wasn’t all plain sailing, I had a few rants (here, here,  and here), and every time I was reminded of the value of blogging, and the fact that by blogging, you become part of a community, and that that community is so supportive and encouraging and downright lovely.
I also got all political and wrote to Big Dave (Cameron PM) and had a few spectacular crafting cock-ups along the way…(scroll down to the Miss and the Maybe part of this post!) 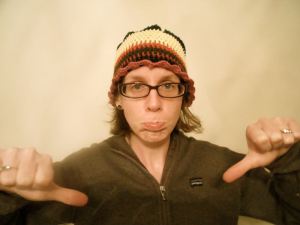 August 2013 saw the official end of My Make Do and Mend Year, and I guess the very fact that I am sat here today writing this blog, proves that the year will go on, and the blog will continue!

On a very personal note, I lost my mum to cancer in October, and once again was overwhelmed with the love and support and compassion of so many of you.

Thankyou so much to everyone for all your love, support, kind words and encouragement. I read every single comment, and I try my best to reply to all of them.
If anyone out there is pondering on a New Year’s Resolution for 2014, may I be so bold as to suggest you try Buying Nothing New.
I can guarantee it will change your life, and it will change the world too.

6 thoughts on “The Year that Was” 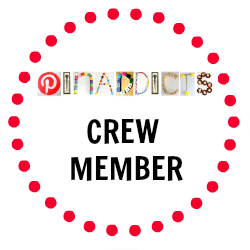 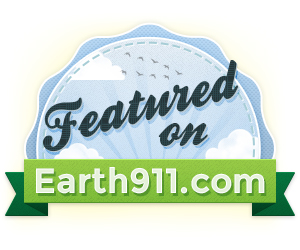 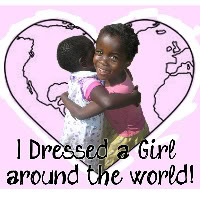