Those of you who are avid fans of Bob the Builder (!) will be more than familiar with Bob and the team’s encouraging chant of “Reduce, Re-use, Recycle”. 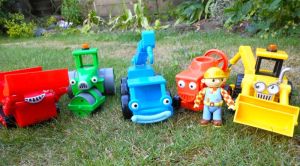 Bob and the team, kicking back in the garden…

But now, it would seem, that there are actually FIVE R’s, not just three.

Who is volunteering to tell Bob?

I found out about the two extra ‘R’s’ when I had a sneaky peak at the Zero Waste Home Book by Bea Johnson.

This is a lady on a serious Zero Waste mission.
I have been following her on Twitter for quite a while now, and she has a great blog here. Someone tweeted me while we were away on holiday to say that she was on BBC Breakfast, talking about her new book. I didn’t see it (we were trying for a Screen-free week ..!), but I really want to get hold of a copy of the book (have just spotted there are now some used ones on Amazon-yay!)

Anyway, according to Bea, the Five R’s, that should be followed in strict order are:

So there you have it.
Just reading the small excerpt from the beginning of the book, has re-inspired me to do more and try harder.
I thought we had done pretty well with Waste Watchers, after Christmas, but this is a whole new level. And not just about waste, but also about consumption, which I guess, is what leads to waste in the first place.

The book looks brilliant. You can find a link to read an excerpt of it here. And if anyone already has a copy, can I read it after you..?!